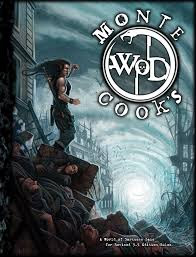 I have never been a fan of White Wolf’s World of Darkness games (Vampire, Werewolf, etc.), but I was definitely looking forward to this book. It is not only a beautiful book, but a dang fine read(Yes I said dang). Even if you never play the game the book is a great source of ideas. Much of the book is written as a narrative by “people” from the World of Darkness Earth.

Basically it is Rifts meets The World of Darkness meets d20. There is a semi apocalypse caused by a “rift” that unleashes magic, demons, vamps and other creepy crawlies into our world. The magic system is more fluid than in the core d20 rules and I like it. Magic isn’t necessarily something that is taught, but something that is felt. Mages don’t have to remember spells and as long as they have what is necessary to cast a spell, they can. Though it is stated the classes from this game can be used in other d20 games, they are set at higher power levels.

The great thing about this book is that it is d20 and compatible with the 3.5 rules. I have run several d20 modern games using this setting and everyone of them was a hit. Should you buy it? If you like horror themed games and the d20 Modern system, then yes. If you are already a fan of the standard White Wolf version, maybe not.
Posted by Geek Gazette at 7:13 AM 2 comments:

Emerald Empire is a sourcebook for the L5R 3rd edition and just like the core book it is beautifully done. Though not required to play, it does provide a lot more detail and history for those that like the depth of the L5R game.
It expands upon everything about life in Rokugan that is presented in the core rules. Customs, everyday life, politics, law and order as well as more details regarding the clans of Rokugan.
Definitely worth picking up if you enjoy playing L5R and like more depth and detail in your game.
Posted by Geek Gazette at 6:02 AM No comments:

This part of a series I have seen mentioned on several message boards and blogs, but the first "episode" is still one of my favorites.

Posted by Geek Gazette at 7:00 AM No comments: