Goodbye RPGBN, it has been fun

I applied for membership with the RPG Bloggers Network not long after it was formed and was accepted. For this I have been thankful.

My thankfulness is not due to any financial benefit or recognition that I have received. Those are not the reasons I even mess with this blog. Granted being a part of the network has increased traffic to this site a little, which is nice, but the most positive part of my membership comes from the opportunity I have had to participate in this community of bloggers. Being a part of this community has put me in contact with some really great people and some really great blogs.

Since I became a member the number of blogs seems to have grown by leaps and bounds. While I followed some of the blogs belonging to other RPGBN members long before the network was created, many others I never knew existed until they became members. The network has definitely worked to expose members and readers to new and entertaining content.

Sure, there have been things that I have disagreed with, choices and opinions, but if we all agreed this whole community would be pretty dull. I pay absolutely nothing for the benefits of my membership and though I have made the rare suggestions when things were brought up to the community, I took no offense when they were ignored. The point being this is not a democracy, my vote doesn't need to count, nor does my opinion. I just appreciate the fact that the views and opinions I do express on my site are allowed to be shared on the network. The founders of this network may not agree or even care about what I have to say, but they give me a larger venue to express those views. Thanks.

Recently when a blogger's application for membership was turned down, many in the community became upset and openly spoke out against those that make the decisions, and since this is a free country they had every right to do so. While I did not agree with their decision, I didn't really speak up. As I said before I'm not the one who pays for and maintains this network, the decision is not mine to make. When I joined I agreed to the rules and other than a few times I mistagged some posts, I have been left alone to do my thing. If the powers that be felt the blog was inappropriate, then so be it. That decision doesn't mean I can't read that particular blog or promote it on my site. The way I understand things, the reaction to their decision has brought them to the conclusion they need to turn the network over to someone else. It saddens me that the very people that created the network no longer feel they belong here, that their creation has turned agains them.

The founders of this network did us all a truly great service and asked only minor compliance for our voluntary participation. We are all free to leave at any time, no questions asked. I make no money from this site, all of the for profit writing I do has absolutely nothing to do with this blog or the RPG industry.My site is nothing more than a minor hobby, something I do for fun. From what little I know about the inner workings of this network, they have never tried to force members to give them money or a share of profits from the bloggers who do make some money from their sites. Sites that likely saw an increase in traffic due to the network, maybe not substantial, but there had to be an increase. To me that is a pretty nice thing for them to do.

While I have nothing but praise for this network and have truly enjoyed my participation, everything has not been peaches and cream. As with any group of diverse personalities, I have seen an increase in animosity and, to be blunt, dick wagging from some members. Just like most message boards, there has been an increase in the number of elitists that take all of this and themselves far too seriously and feel that they somehow know more or are better than others. I find this type of behavior disappointing, but understand that it is simply the way of the world, especially on the internet.

The elitists among us will continue to think very highly of themselves and that is fine, a positive self image is a great thing to have. Unfortunately, they seem to only be able to maintain that self image by trying to prove their superiority and get their jollies by insulting others and creating turmoil. Now that the network is up for grabs, those same elitists have the opportunity to gain control and bask in their delusions of grandeur. I just don't want to be here to see this network go down the toilet if that happens. Too much good has and still could come from this community but I don't have a good feeling about the future direction of the network. Hopefully I am wrong, the community will rebound from this, remain strong and it won't be left to the elitists and their sycophants.

In a recent discussion the fact was brought up that most of the readers of rpg blogs are other bloggers, not the much larger community of gamers and industry professionals. Though I do know that some pros read at least a few of the blogs, there are far more gamers that have no idea we exist than there are people who read our blogs. Granted a few truly dedicated and talented among us will be able to turn their blogs into a career in the industry, but they are the exceptions that would have succeeded with or without the network. For the most part this community is about us patting each other on the back and complimenting each other on posts, which is all fine and good, but in the grand scheme of things means nothing. In our small corner of the multiverse, megaverse if you are a Palladium fan, we get to feel that we are contributing something, but realistically we're just a bunch of fans sharing ideas. The fate of the industry does not fall on our shoulders. Our bitching and whining won't make 4e go away or make Palladium/HEX/d6/Savage Worlds.... the most popular rpg in the world.

I won't lie, recent events on the network have soured me on blogging and I apologize if my attitude seems overly cynical. The fact I have become disillusioned is why I am planning to take a little break from the Geek Gazette and if that means I get removed from the network, then so be it. It is probably for the best anyway. I have a book to finish, a family to support, campaigns to plan and a Masters degree to earn, blogging just doesn't seem that important at the moment. I wish everyone on the network the best of luck in the future and I definitely want to thank Phil, Dave, Danny and Graham for all their often unappreciated hard work as well as the opportunity to participate in what they created.

Happy Halloween and best witches,
Michael
Posted by Geek Gazette at 5:11 AM 4 comments: 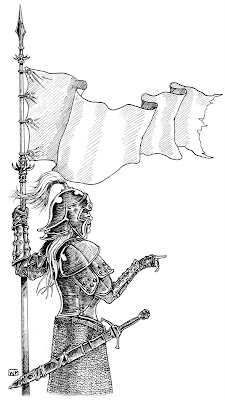 This weeks image courtesy of William McAusland and the gang over at Outland Arts.
Posted by Geek Gazette at 1:53 AM 1 comment: