The comic Foxtrot is one of my favorites and I think it is funny that such a geek oriented strip makes it into my local paper. Now if only they'd add Spider-man, Full Frontal Nerdity, Flare and the Phantom.

Stock art for your RPG

This really doesn't affect me since I am not currently designing my own rpg products, though I am thinking about it, but Louis Porter Jr. has apparently released a line of stock art for you to use.
I admit that I don't know much about the topic, but the prices seem pretty reasonable to me. If you are designing your own game or supplement I'd suggest checking them out.
Posted by Geek Gazette at 9:31 AM 3 comments:

A quick rant about digital magazines, plus more Matrix movies.

I am a pretty big magazine reader. I read at least 20 mags per month (my wife made me cut back) and that doesn't count comics. Of course 3-4 of them are related to my field of study, but the rest are just for fun.

Pretty much every day I have a magazine or comic book in my mailbox and the magazine rack is one of the first places I hit in any store. I actually choose the stores I prefer shop at according to the quality of their magazine racks.

This is one of the reasons I was so upset when WotC canceled both Dragon and Dungeon magazines and moved them to a digital format. I absolutely hate reading digital magazines and until Kobold Quarterly came along they were the only gaming mags I knew about. Though Knights of the Dinner Table did ease the pain of their loss somewhat.

Sure I read quite a few blogs, online news sites and messageboards, but those are usually quick reads meant to grab small bits of info. I use them just to keep up to date on topics I can't always find in magazines. Honestly my online reading pretty much revolves around RPGs, and current comic book news. Everything else I try to get from a print magazine.

Before long it seems like I will be stuck reading damn near everything in digital format or not reading them at all. RPG books, comics, magazines, newspapers are a going digital.

I don't want to buy a new tablet PC/ipad, e-reader or smart-phone just so I can enjoy my favorite magazines/comics/books. I'm not that old and I stay fairly knowledgeable regarding current technology, but this push to make us slaves to our digital masters (a little melodramatic, I know) not only makes me feel old, but it pisses me off. I don't mind having a choice between print or digital, but I don't like being forced to accept something I don't like or want just keep keep reading the things I enjoy.
I feel the same way about this push for all movies to be 3-D. I don't $#%^ing want to see movies in 3-D! I want plane old 2-D that I can enjoy without paying an extra $10 per ticket and without wearing those $#%^ed - up glasses.

What was I talking about? Oh, yeah...

Wizard magazine, one of the few comic book magazines that can still be found on the magazine rack in your local grocery, and pretty much every where else,  is apparently ceasing publication along with sister magazine Toyfare. According to the press release at Newsarama, Wizard will become a digital magazine called "Wizard World".

Now I admit that Wizard has not been up to par for quite a while and they have always been a bit selective about which comic/companies were covered, but with hobby magazines quickly disappearing from magazine racks they were kind of the last bastion of geekyness among all of the mainstream mags. All we have left are the few science magazines (as long as they manage not to get hidden behind the latest issue of Rachel Ray), Archie Digest (the last comic book on the rack) and the few remaining video game magazines. I find this very upsetting.

Here is the press release:

GAREB SHAMUS UNDERTAKES PUBLIC COMPANY WIZARD WORLD, INC. AND LAUNCHES NEW ONLINE PUBLICATION ‘WIZARD WORLD’
New York, NY (January 24, 2011) – Gareb Shamus, recently appointed President and CEO of public company Wizard World, Inc. (“Wizard World”) (OTC: GOEE.PK), today announced that the Comic Con Tour, which consists of pop culture conference events that provide high visibility marketing opportunities to pop culture brands and companies in multiple venues throughout the year, is now being produced by public company Wizard World. The Wizard World Comic Con Tour intends to cover 12 cities in 2011, including major cities such as New York City, Boston, Chicago, Philadelphia, Austin and New Orleans. The Tour will include sponsors ranging from major movie studios and TV networks to gaming and toy companies to content publishers.
In addition, Wizard World plans to launch in February 2011 an all-new digital magazine called ‘Wizard World’ that will appeal to pop-culture fans, the same audience to which Mr. Shamus has catered to, for over 20 years. Wizard World digital magazine will provide coverage of the world of comic books, toys and superheroes, and the personalities behind them.
“This is a very exciting day for Wizard World and the industries it serves,” said Shamus. “Having the Tour produced by a public company provides additional opportunities to expand and grow the Tour. The new digital magazine Wizard World will give consumers the content they want in a magazine format with which they are familiar, but distributed in a form that is always available at any time on any device. It is a natural evolution for us in this market.”
Wizard World Comic Con will begin its North American tour at New Orleans Comic Con held from January 29 to 30, 2011. The full event schedule can be found at www.wizardworld.com.

I've been trying to rebuild my 2nd edition AD&D collection for a while now (how the originals were lost is a story for another time) but it's difficult to do when you are on a gaming budget (it sucks being a grown up with bills to pay) and still trying to keep up with new product released for current RPGs. So I scan ebay, half.com, Amazon and used books stores when I get some extra coin in my pocket and sometimes my quest pays off.
This week I'm proud to announce a new little treasure has been added to the collection, the Monstrous Compendium vol. 1. I also found copies of the black PHB and DMG to put next to my original 2e PHB and DMG. I'm expecting them any day now.
Most of you could probably give a rat's ass about the fact that I reacquired this book, but I'm excited about it. I've wanted a new copy of this for years and either had other obligations or was honestly broke when I came across it. For me this is a real treat so let me have my moment of happiness. 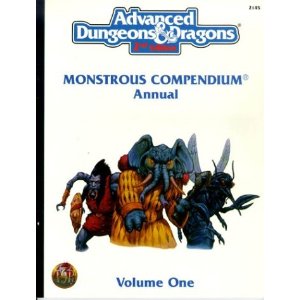 Now I just need a group willing to play 2e. Unfortunately I don't think they sell those on ebay. At least not in my price range.
Posted by Geek Gazette at 9:01 AM 4 comments: