The other day I was reading through the new Mysteries of the Hollow Earth book and it hit me, HEX would be great for running horror games. Now I've only played the Ubiquity system a few times but I really liked it. The game is fast, fun and character creation is a snap. I hate having to roll tons of dice to get results, but that is easily fixed by taking the average, or just have the GM and player both roll a d20 and which ever number is higher "wins".
There are hints in the books of Cthulhu mythos possibilities, the game is a pulp setting and just because it is set in a reality where the earth is hollow doesn't mean you have to have every adventure set below ground. There are still plenty of surface world adventures to be had.
The characters have low health, so they have to be cautious, and and if you pick up the Danger Magnet 2008 Halloween special there are articles for running horror themed games. Including Cthulhu, zombies and one about killer dolls, which reminds me of the Supernatural episode I watched last night.
I personally think that HEX is a good system for running these types of games, especially with a group of occult and paranormal investigators. I wonder why they haven't put out a Horrors of the Hollow Earth sourcebook?
Exile Game Studio
Amazon
RPGNow

Also I completely forgot to mention a great horror themed setting for Rifts players, Madhaven. Of the Rifts sourcebooks I own, which are more than I have ever actually used, this is probably my favorite. There are some great creatures as well as rules for using them in Beyond the Supernatural. Definitely worth checking out.
Palladium
Amazon

Now before I start hearing lectures about how any system can be used to run any type of game I want to say that I know. I do, however, think that some systems are better suited for certain types of play than others. One example of this is Mutants and Masterminds. Despite a couple of the books having stats for Cthulhuish creatures, I think one of them was Book of Magic, the game just doesn't feel right for that type of game. I think this point is even brought up in at least one of the books. Sure you could reduce the power levels to the point it could work, but the game is meant to be run as a superhero game, something the game does extremely well. For me atleast this is the best superhero system out there, but for horror, not so much. Now if you want to have your supers go up against an elder god, like in that episode of JLU, you can, but I still don't like the system for horror. Sci-fi, supers and some fantasy, yes, horror, no.
Of course the same argument could be made for Rifts, and I would not disagree. Which is why I recommend using a lower powered party if you want to use the setting in Rifts, at which point I think it would work very well. Otherwise just use the monsters in the book for a Beyond the Supernatural game.
Posted by Geek Gazette at 7:30 AM No comments: 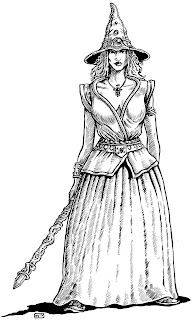 Image courtesy of William McAusland and the gang over at Outland Arts.
Posted by Geek Gazette at 6:48 AM No comments:

I am an avid reader and naturally gravitate towards horror books at this time of year. What follows are some of my all time favorite books that get me in the Halloween spirit. Most of which are great for coming up with ideas for your Halloween RPG session. Especially the H.P. Lovecraft stuff if you are a Call of Cthulhu player.

I don't know if this is real or a fake, but it is still a pretty cool video. My first instinct is to assume it is a staged event, but it seems real enough to make me consider the possibility. If this is not a fake it would be the best UFO video footage I've ever seen.
Here is the link.
Posted by Geek Gazette at 9:55 AM 2 comments: